Over the centuries, this iconic wine has built its reputation around one very special hill, and a history wrapped in myth.

Originally, the hill was home to a hermitage founded in 1224 by Gaspard de Stérimberg. De Stérimberg was a knight of Blanche de Castile. When he returned battle-weary from the Albigensian crusade, he chose to withdraw from the world and live as a hermit at the top of this granite hill. Others soon joined him, and the new community turned to winegrowing. It’s a charming story, but overlooks the fact that Hermitage owes only its name to the hermit. The vineyard has been there since ancient times, making what the Romans called the “wines of Vienne.” The distinctive vin de paille (straw wine) now being revived by some winemakers is a direct descendant of Gallo-Roman wine making methods.

The wines of Hermitage were popular with the Romans, who called them “the wines of Vienne” - just like those of Côte-Rôtie. Hermitage wines later became known as “St Christopher’s Hill wines” after the chapel dedicated to the Saint. It would seem that the name “Hermitage” appeared only later, in the 17th century, in memory of Henri Gaspard de Stérimberg, who on his return from the Albigensian Crusades in the 13th century, withdrew from the world to live as a hermit on this hill granted him by Blanche of Castile, Queen of Spain. It is said he replanted the vineyard that would become known first as Ermitage, and then Hermitage. This was just the start of its success: under the reign of Louis XIV, Hermitage was the preferred wine of the Tsars of Russia; in fact, the list of Hermitage enthusiasts is long and illustrious, and includes notables such as Henry IV, Boileau, Louis XIII, Louis XIV, Nicolas II and Alexandre Dumas.

Hermitage was awarded AOC status in 1937.

The Hermitage vineyards span three communes in the Drôme: Tain-l’Hermitage, Crozes-Hermitage and Larnage, on the left bank of the Rhône.

The climate is Mediterranean, sheltered from northerly winds. Most of the slopes face south and enjoy good sun exposure.

This iconic terroir is made up of granitic sand with a covering of mica-schists and gneiss with rounded alluvial pebbles closer to the riverside. The diversity of soils also explains the number of different, named plots in the appellation area, including Bessards, Greffieux, Méal, Rocoules, Beaumes etc. Hermitage hill can be subdivided into three sections. Starting from the west, on the left bank, the first section is Les Bessards, a hilly granite terroir considered to be the appellation’s “red” terroir. This is the slope where the eponymous Hermitage can be found, and also the famous L’Ermite vineyard. The central section is divided into two parts. The upper part, Le Méal, has limestone and flint soils with a surface covering of rounded pebbles, and its south-facing vineyards produce wines bursting with sunshine. In the lower section, Les Greffieux, the soils are shaped by gully erosion, and are relatively more fertile. Finally, the Murets and Dionnières parcels have a clay soil and far gentler slopes. They lie more to the east, and are superb white wine terroirs. 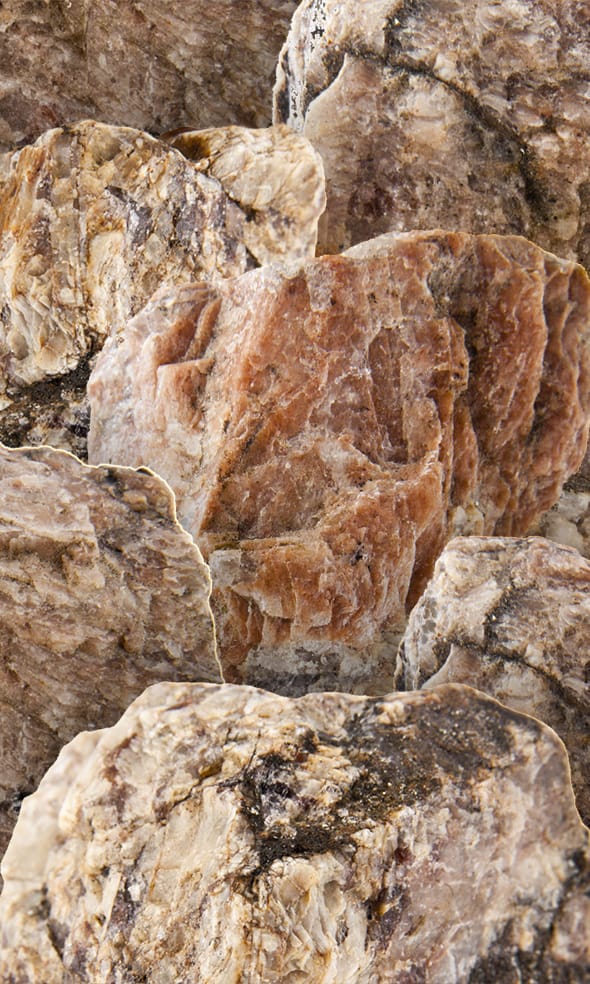